Please note: throughout this article, I refer to ‘women’ and ‘men’. When talking about women, I’m referring to those with a menstrual cycle. Not everyone who has a menstrual cycle is a woman and not all women have menstrual cycles. I wrote a version of this article with ‘menstruators’ and ‘non-menstruators’ but made the decision to use ‘women’ and ‘men’ as I felt it was the clearest way to make my point. For some, not having a period is an essential part of their gender identity and I wish to acknowledge that.

There’s a doctor with a mission to almost-eliminate periods. Her TED talk is here and there’s an article in The Atlantic about her here. Her MO is to ‘level the playing field’ between women and men. She would like women to have about 28 periods in their life (the 2 first years whilst they regulate and perhaps some when getting pregnant then menopause, boom).

I have so many problems with this, like the fact that return of fertility is rarely immediate enough for this to work (nor is it wise to conceive right after coming off the pill) like the sacrifice of the individual, particularly when it comes to the brain, like the fact there has never been a study to show what would happen if someone took the pill for this long, and in the absence of that study, the multitude of evidence showing the extremely dangerous and long term side effects of taking synthetic hormones…

I could go for days. My point in this article isn’t about the impact of the pill, it’s about this notion of what it would mean to ‘level the playing field.’

The (young*) male hormone cycle looks something like this:

Testosterone peaks in the morning (go to the gym) and then it starts to drop off right around happy hour (anyone else need a drink? I’m pooped!)
*the peak in the morning becomes less pronounced with age 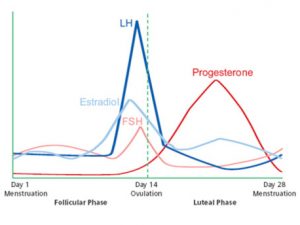 Hormones are lowest during the period, estrogen (estradiol) dominates until ovulation and progesterone dominates after that. There’s a surge of other hormones around ovulation too. This means that a morning workout one day would feel awesome, whilst on another it would feel like a bar fight.

In Dr Yen’s eyes, levelling the playing field looks like turning the natural female hormone cycle off so that we’re equal to men (gaping hole in the argument that it’s not actually ‘equal’ unless we also get a big* ol’ surge of testosterone in the morning to get us pumped for the day…)

*we do get a little one, but it pales in comparison

In my eyes, levelling the playing field looks more like acknowledging the female hormone cycle as the essential cornerstone of society that it is and allowing us to work in flow with this rhythm, the way that men do with theirs.

If a woman was allowed to tune in with her body and work according to their fluctuating skillset, not only would the playing field be levelled, but the world would improve in every way.

Dr Yen has a point that the menstrual cycle changes us, daily. And absolutely, if you’re not aware of what that means for you, and it’s just *happening in the background* you can start to feel pretty terrible about yourself. ‘How can I be so productive one day and the next, I’m moving into the snack cupboard and averaging two emails an hour?’

But if you know this is happening, and you work in a place that supports you in identifying your strengths and weaknesses at the different points in your cycle and in scheduling your work around that… not only would you gain more enjoyment from your day-to-day, but your business would benefit exponentially!

Sure, in some contexts, the work isn’t varied enough to change the tasks. But you could change the number of hours worked and provide space and support for rest when needed, knowing that the benefits of acknowledging the dynamics of the cycle far out-way the apparent lack of productivity that stopping requires.

Someone who has been allowed to rest completely during their period is an unstoppable force, brimming with ideas, solutions and clarity.

Who wouldn’t want that?

Perhaps we needed to act like men for a time, in order to gain the respect required to enter into the workplace. We needed the pill to advance us both at work and at home. In many communities and for many, hormonal birth control is still an essential part of life and the sacrifices are worth the pay off. But for most who will read this article, we do not need it.  We have all of the information in the WORLD at our fingertips, we can be our own birth control and embrace the power that lives in our menstrual cycle.

An environment that honours this natural cycle, that worships pregnant women and provides paid leave during menopause is one that is level. The menstrual cycle is the foundation for creating the next generation of humanity; we have access to multiple versions of ourselves, our skills and our psyches; we deserve to live in our fullest expression.

Society has been built around men with women treated as a sub-set or a minority. We’ve bent ourselves into pretzels to try to fit in, we’ve returned to work two weeks after giving birth, braced ourselves through hot flushes and smiled our way through menstrual cramps. Enough is enough.

If we weren’t trying so hard to be something we’re not, perhaps we would have a little more capacity to enjoy and love ourselves, to reach the bliss points of menstruation and birth and to meet the transformation of menopause with excitement rather than dread.

We don’t ‘level the playing field’ by medicating and numbing ourselves to fit in with what works for men.

We level the playing field by being totally, unabashedly, proudly ourselves, and by demanding that society takes us for who and what we are.

I’ve unsubscribed to not embracing my cyclical nature. Will you?